Camus: At any street corner the feeling of absurdity can strike any man in the face.

Beckett: the End of Modernism and the Postmodern (60s)

THR413 Playscript Analysis and acting, directing classes (how to do absurdism)

"The farther he goes the more good it does me. I don't want philosophies, tracts, dogmas, creeds, ways out, truths, answers, nothing from the bargain basement. He is the most courageous, remorseless writer going and the more he grinds my nose in the shit the more I am grateful to him. He's not f---ing me about, he's not leading me up any garden path, he's not slipping me a wink, he's not flogging me a remedy or a path or a revelation or a basinful of breadcrumbs, he's not selling me anything I don't want to buy ˇŞ he doesn't give a bollock whether I buy or not ˇŞ he hasn't got his hand over his heart. Well, I'll buy his goods, hook, line and sinker, because he leaves no stone unturned and no maggot lonely. He brings forth a body of beauty.
His work is beautiful." -- Harold Pinter about Beckett 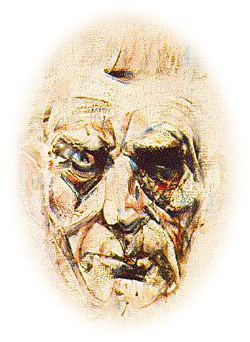 HAMM:
It's we are obliged to each other.
(Pause. Clov goes towards door.)
One thing more.
(Clov halts.)
A last favor.
(Exit Clov.)
Cover me with the sheet.
(Long pause.)
No? Good.
(Pause.)
Me to play.
(Pause. Wearily.)
Old endgame lost of old, play and lose and have done with losing.
(Pause. More animated.)
Let me see.
(Pause.) Ah yes!
(He tries to move the chair, using the gaff as before. Enter Clov, dressed for the road. Panama hat, tweed coat, raincoat over his arm, umbrella, bag. He halts by the door and stands there, impassive and motionless, his eyes fixed on Hamm, till the end. Hamm gives up:) Good.
(Pause.)
Discard.
(He throws away the gaff, makes to throw away the dog, thinks better of it.)
Take it easy.
(Pause.)
And now?
(Pause.)
Raise hat.
(He raises his toque.)
Peace to our... arses.
(Pause.)
And put on again.
(He puts on his toque.)
Deuce.
(Pause. He takes off his glasses.)
Wipe.
(He takes out his handkerchief and, without unfolding it, wipes his glasses.)
And put on again.
(He puts on his glasses, puts back the handkerchief in his pocket.) We're coming. A few more squirms like that and I'll call.
(Pause.)
A little poetry.
(Pause.)
You prayed---
(Pause. He corrects himself.)
You CRIED for night; it comes---
(Pause. He corrects himself.)
It FALLS: now cry in darkness.
(He repeats, chanting.)
You cried for night; it falls: now cry in darkness.
(Pause.)
Nicely put, that.
(Pause.)
And now?
(Pause.)
Moments for nothing, now as always, time was never and time is over, reckoning closed and story ended.
(Pause. Narrative tone.)
If he could have his child with him...
(Pause.)
It was the moment I was waiting for.
(Pause.)
You don't want to abandon him? You want him to bloom while you are withering? Be there to solace your last million last moments?
(Pause.) He doesn't realize, all he knows is hunger, and cold, and death to crown it all. But you! You ought to know what the earth is like, nowadays. Oh I put him before his responsibilities!
(Pause. Normal tone.)
Well, there we are, there I am, that's enough.
(He raises the whistle to his lips, hesitates, drops it. Pause.) Yes, truly! (He whistles. Pause. Louder. Pause.) Good. (Pause.) Father! (Pause. Louder.) Father! (Pause.) Good. (Pause.) We're coming. (Pause.) And to end up with? (Pause.) Discard. (He throws away the dog. He tears the whistle from his neck.) With my compliments. (He throws the whistle towards the auditorium. Pause. He sniffs. Soft.) Clov! (Long pause.) No? Good. (He takes out the handkerchief.) Since that's the way we're playing it... (he unfolds handkerchief) ...let's play it that way... (he unfolds) ...and speak no more about it... (he finishes unfolding) ...speak no more. (He holds handkerchief spread out before him.) Old stancher! (Pause.) You... remain. (Pause. He covers his face with handkerchief, lowers his arms to armrests, remains motionless.)
(Brief tableau.) Curtain 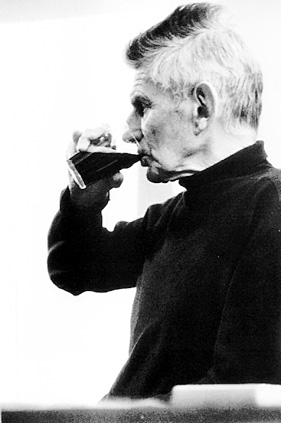 "A work of art is the expression of an incommunicable reality that one tries to communicate..." Ionesco

I'm not quite certain I have a handle on how to grasp this play, it was more difficult to picture, it just comes across as a better play to watch rather than to read. But there are some concepts in here that made sense and I really enjoyed pondering them. It's precisely for times like these that I'm grateful that art is relative, I'm grateful it's based on individual interpretation, or I'd be in a lot of trouble, here:
If I understand this play correctly, nothing is finished. Things are ending, the world has ended, and these characters (Hamm, Clov, Nagg, Nell) are somewhat trapped here, waiting to die, waiting for closure, waiting for SOMETHING! There's no reality, no consistancy, no sense, nothing is certain. There's no ocean but the sound of waves, there's no place "just right" to put the chair, nothing is where it should be. The dog is fake yet it's real to Hamm. It's not time to take the painkiller, but there's no painkiller left anyways...There are so many Zen concepts in here I can't begin to count them! Everything in nothing! It's all here!

I love the relationship (strained as it is) between Hamm and Clov. Some beautifully haunting lines come from their dialogue. ("If you leave me how shall I know?" "You won't come and kiss me goodbye?") I was strained by the desire for one to have the other stay against his/her will. The fact that these characters are genderless make it easier for me to project my own emotions upon them. I understand this as a possible aim Beckett had: how would we respond when there is nothing left?

This play was very profound to me, amidst all the talk of pee and corpses, there's an underlying sense of the fragility and profundity of humankind, of human thought. Our thoughts are all we have that tie us to our understanding of the world around us. This play made me think of the possible results of when the end does come, when we don't even have the tangibility of our thoughts to rely upon... Perhaps I really do understand something about this play. 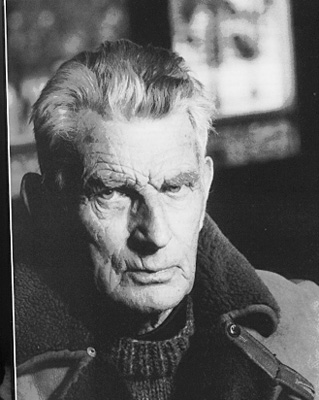 Did we finally arrive to the war with the "last enimy -- death" (Bible)? Is it about the mortality? Death of every individual is the death of the world?

Paradox: the 20th century is the bloodiest!

As with Chekhov, we do not see comedy in Beckett (Ionesco's absurdism is easier). Again, remember "Divine Comedy" (concept).

Mind and Body, Master and Servant (Plato). Memory (parents) are separated too.

Becket after the Postmodern: transcultural (Existentialism ends in a concept of "Culture of One") -- M. Epstein

Web & Internet -- we do not see the changes, because we have changed!

horror at atrocities of WWII

philosophy, religion, art, modes of identity = human-made structures that give illusion of meaning

meaning & purpose = attainable only through individual choice and action

use of silence (pauses)

Bare interior. Grey Light. Left and right back, high up, two small windows, curtains drawn. Front right, a door. Hanging near door, its face to wall, a picture. Front left, touching each other, covered with an old sheet, two ashbins. Center, in an armchair on castors, covered with an old sheet, Hamm. Motionless by the door, his eyes fixed on Hamm, Clov. Very red face.

CLOV (fixed gaze, tonelessly): Finished, it's finished, nearly finished, it must be nearly finished. (Pause.) Grain upon grain, one by one, and one day, suddenly, there's a heap, a little heap, the impossible heap. (Pause.) I can't be punished any more. (Pause.) I'll go now to my kitchen, ten feet by ten feet by ten feet, and wait for him to whistle me. (Pause.) Nice dimensions, nice proportions, I'll lean on the table, and look at the wall, and wait for him to whistle me.
(He remains a moment motionless, then goes out. He comes back immediately, goes to window right, takes up the ladder and carries it out. Pause. Hamm stirs. He yawns under the handkerchief. He removes the handkerchief from his face. Very red face. Glasses with black lenses.)

HAMM: Me--- (he yawns) ---to play. (He takes off his glasses, wipes his eyes, his face, the glasses, puts them on again, folds the handkerchief and puts it back neatly in the breast pocket of his dressing gown. He clears his throat, joins the tips of his fingers.) Can there be misery--- (he yawns) ---loftier than mine? No doubt. Formerly. But now? (Pause.) My father? (Pause.) My mother? (Pause.) My... dog? (Pause.) Oh I am willing to believe they suffer as much as such creatures can suffer. But does that mean their sufferings equal mine? No doubt. (Pause.) No, all is a--- (he yawns) ---bsolute, (proudly) the bigger a man is the fuller he is. (Pause. Gloomily.) And the emptier. (He sniffs.) Clov! (Pause.) No, alone. (Pause.) What dreams! Those forests! (Pause.) Enough, it's time it ended, in the shelter, too. (Pause.) And yet I hesitate, I hesitate to... to end. Yes, there it is, it's time it ended and yet I hesitate to--- (He yawns.) ---to end. (Yawns.) God, I'm tired, I'd be better off in bed. (He whistles. Enter Clov immediately. He halts beside the chair.) You pollute the air! (Pause.) Get me ready, I'm going to bed.

Define the principles of Beckett's exposition in Endgame.

[ Commentaries on Beckett, textbook -- must read ]

[ 200 words on Endgame ] godot: fate is determined by chance = the meaninglessness of time, or "+"

Before -- "the Existentialist assumes that existence precedes essence, that the significant fact is that we and things in general exist, but that these things have no meaning for us except as we through acting upon them give them meaning. That is, there is no real meaning in any event or group of events except what the individual gives it." ©2004 filmplus.org *

(c)2003-2004 * Theatre w/Anatoly *
Don't forget to check your class page -- click here! Take notes while reading plays! Bring your notes to class! Take your notes IN CLASS!
Get Site Info One of the key ideas of existentialism that the Absurdist playwrights locked onto was this idea of this world without meaning, it was Absurd, without purpose and yet people continued to live in it and do their absurd duties in their absurd lives in their absurd world

Consider Albert Camus The Myth of Sysphus, which deals with the character of Sysphus who is damned to push a boulder up a hill, only to fall back to the bottom whenever he reached the top. This is the perfect example of human existence being barred by an absurdist notion

~ " Symbolic use of stage properties "
- Tree in Godot

Living is abnormal. -- The Rhinoceros

Berenger - an average citizen in a nameless French city - is not interested in the fact that rhinoceros are on the loose. This causes him to quarrel with his friend Jean and his attractive secretary Daisy outside a grocer's shop. The argument continues with many local joining in - these include the grocer and his wife, a waitress and a housewife, a cafe owner, an old gentleman, a waitress and a logician. The group try to reason the events that are happening around them. The results are understandably chaotic.

In the local government office where Berenger works he witnesses that the staff are gradually turning into rhinoceros.

Eventually Berenger finds out that Daisy and he are the only human beings left. To his surprise Daisy then too turns into a rhinoceros. Berenger concludes he will then fight against all the rhinoceros... [Ionesco Page]

http://www.arts.gla.ac.uk/Slavonic/Absurd.htm THE THEATRE OF THE ABSURD: THE WEST AND THE EAST