V: That passed the time.
E: It would have passed in any case.

Endgame (Eschatological play, the ending of the world) (THR 215 DramLit)

The avant-garde of the theatre and the Western World crisis: the culture. The illusions of reason. "The divorce between man and his life, the actor and his setting, truly constitutes the feeling of Absurdity." (Camus. 23)

Absurd (out of harmony) (music)
Ionesco: "Absurd is that is devoid of purpose." (On Kafka)
Anti-theatre and the End of Theatre.

From Existentialism to the Absurdity of human conditions.
Being is Nothing. Shestov on Chekhov (Creating from the Void).

The static world: waiting is the subject of the play! "Act of waiting -- to experience the flow of time." (Proust)

Devaluation of language, including writing in "foreign" language.
Repetition (Bergson and Deleuze)

Men of the private living, outside the theatre...

The Family Idea: family of one. The Inside and the Outside.

Review (Beckett's answer to the existential): Existence as Nothing. State of Nothing. Nothing is a Process.

A PLAY IN ONE ACT

Front right, a door. Hanging near door, its face to wall, a picture.

Front left, touching each other, covered with an old sheet, two ashbins.

Center, in an armchair on castors, covered with an old sheet, Hamm.

Motionless by the door, his eyes fixed on Hamm, Clov. Very red face.

Minimalism (as style and method)

Tragedy as comedy: "Nothing is funnier than unhappiness." (Beckett)

Texture instead of structure! Allegories (voices) instead of characters, situation instead of plot.

Without time = passing time. After the End (of Time). [See more in Post-America, POV and Self]

They were ahead of the New Wave, but nevertheless everything ended in 1968 as well...

"If I was dead, I wouldn’t know I was dead. That’s the only thing I have against death. I want to enjoy my death. That’s where liberty lies: to see oneself dead." –Eleuthéria

BECKETT: most un-produced playwrite "Real Theatre" -- now only off-Broadway or regional theatre, if you're lucky. Chekhov is difficult, but the problem with Beckett ... Even the video which he directed personally is not that good. See notes on Endgame, etc. -- beckett.html

Shakespeare was popular in London in his time; then forgotten two centuries later (they weren't ready) until the French Century of Enlightenment: 1800's rediscovered Shakespeare. The end of the 18th century, German Romanticists brought him back.

AA: I suspect it's not Beckett's time, yet. Too advanced for us? For our technology? All his life Meyerhold (director) tried to destroy proscenium theater.(box) Russian theatre is built specifically for Chekhov, etc. Ours (UAF) is OPEN proscenium that "I need to be close to the actor as possible." Started with Chekhov, that closeness; Beckett took it to its natural end. It's not knowledge, as such, but APPLICATION; not just understanding Beckett, but being able to apply it. Beckett as magic stone. If you know how to do (play), you know everything. [Read out loud "Catastrophe" in class.] What's it about? "Dehumanizing." "It's a good thing it's next to "Endgame."

What is the "catastrophe"? Whose body is the dead body?

Is he a Symbolist?

What is the catastrophe? God is dead? FH: 3 points of God not able to talk to each other.

Diana: Before you can de-humanize -- don't they have to be human, first?

Symbolism: no names needed, only functions. Lighting: story board shots, details... Why so much emphasis on toes? when only head shows? This "light" doesn't bring anything into light! What is meant by the title "Endgame"? (Chess term--no one can win.) Why "end"? What "ended" [Civilization.]
Existentialism -- If Clove left, Hamm wouldn't exist; if there is someone else like him in the end--no good production because they play it "absurd." Plot? Character? Can I take you, the audience, with me? On the trip through drama?

The play is two hours long--maybe that's why "Catastrophe" is so short.

AA: Interpret the play IDEA (Catastrophe) delivering statement, now: "Endgame" explains it. Directed as metaphor, looking for expression: no man or woman present anymore--the WORLD HAS ENDED. To EXPERIENCE this happening! Do you believe there is an end of the world? Each individual playwright's conception, offering--and comes with their own answers. The people of 999... A.D.: everyone thought the world was coming to an end! Every science fiction video is about the end of the world--superstition.

Fifty years from now people won't feel the same way about the end of the world as we do right now.

No Utopia (as in communist propaganda;) only 'dis'topia -- Coming from Russia I thought I'd find (in film) a lot of romance, erotica, etc., but mostly I'm finding science fiction doom. Ray Bradbury is a very popular sci-fi writer; boyish fantasy regarding the future. Look at "Matrix." (movie)

AA: "Denying existence of future, is contrary to our prosperity."

Mike: It's because of our prosperity... [lost thread]

AA: The minute we get "comfortable"...

Tracy: Fall is the most prosperous time, because that's when the fruit is harvested.

According to Beckett, there is no beginning -- only end. No space, time, future, possibility for changes; Just ME (definition of Hell) [egads] Time is nothing but the product of human being. No time exists outside of man. 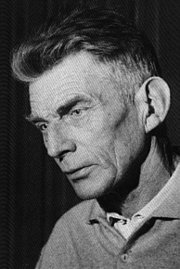 What if:
All the time people are dying--every time somebody dies -- we die. Nobody is born to take his place. Birth doesn't exist in the world with no Time.
Time dies within us.
Time dies: we live...with the consequences. Go inside: the inner world. Your mind. Stream of consciousness-to make a world.

Why no movement after '60's theatre? New concept, new view, etc.? Why not after 3 decades? Individual styles, yes; but not "new" styles -- only collages [mix 'n match] Different voices, techniques; but all fall back on old methods. To follow Beckett's vision/concept: his mentor: James Joyce (B. spent 15 yrs. as his secretary). Joyce thought that he was writing the books that would end novels. That's why Beckett thought the same about his plays: thought he was writing plays that would end theatre -- Anti-theatre Brecht modernist: we can change the world for the better. (theatre as tool in art.) Beckett did not think we could change the world for the better.

Is this a comedy or tragedy? Characters ridiculous! Parents in trash can, like clowns. Aristotle can be applied?

Beckett is saying we can be both! How can I define this genre, tragedy with comedy, et vice versa? Both define each other. They CO-EXIST.

Repetition is a device of comedy. Tragedy leads to comedy.

Hegel: idealist with huge ego; ABSOLUTE idea, used for his own evolution, forms in history, realization levels, etc., etc. (pg. 463) to Hegle himself, Philosophy: THOUGHT HAS ITS OWN LIFE; its final form is being.

FUJIMUTA, 1994, "The End of Man & History" applying Hegle's theory to our world as we know it. Modernism: conclusion of human civilization. (p.459)

The "re-ordering" of things? Category. "Emotional time" -- RELATIVITY: Yours is different from mine, depending on where we are from each other.

We need a "mutual time."

AA: I have five references of time: clock on wall, clock on vcr, clock on microwave oven, clock on wrist, clock in car--why do we need so many time(s)?

We are all born mad. Some remain so. –Waiting for Godot
[ subjects :

Beckett: "I had little talent for happiness."

Duality of genre in Beckett: comedy=tragedy. Only tragic is comic. Paradox. The same event could be seen as tragic (from inside) and comical (from outside) -- at the same time!

"Beckett secured his position as a master dramatist on April 3, 1957 when his second masterpiece, Endgame, premiered (in French) at the Royal Court Theatre in London. Although English was his native language, all of Beckett's major works were originally written in French--a curious phenomenon since Beckett's mother tongue was the accepted international language of the twentieth century. Apparently, however, he wanted the discipline and economy of expression that an acquired language would force upon on him." [ from imagi-nation.com ]

-- I am a college student who was required to read the book. I am all about deep meanings in life and looking for other ways of interpeting a writers different views but i feel this book/play was a waste of thought and lacked any purpose.

-- I am loathe to badmouth anything that came from the great Samuel Beckett, but I can't bear it. Happy Days is the worst play I have ever read. It is a mundane, insipid melodrama of no merit whatsoever. The idea is weak to start with; Winnie is a middle-aged woman buried up to her waist in dirt. SWith only a few possessions and Willie, a mumbling gargoyle of sorts, to keep her company, she remains entrapped in her absurdist situation, delivering a dull monologue that swings between pathetic whining and annoying screeching. I can't even imagine that watching this play would be an any more pleasant experience. No one moves at all, and all that keeps this play "going" is Winnie's humdrum soliloquoy. It's hard to imagine that the talent behind Waiting for Godot and Krapp's Last Tape could have been responsible for this tripe. I'm a worse person for having read Happy Days, a book which only deserves the title when it is burned publicly.

"Beckett's dramatic works do not rely on the traditional elements of drama. He trades in plot, characterization, and final solution, which had hitherto been the hallmarks of drama, for a series of concrete stage images. Language is useless, for he creates a mythical universe peopled by lonely creatures who struggle vainly to express the unexpressable. His characters exist in a terrible dreamlike vacuum, overcome by an overwhelming sense of bewilderment and grief, grotesquely attempting some form of communication, then crawling on, endlessly." [ ]

Beckett: Here form is content, content is form. You complain that this stuff is not written in English. It is not written at all. It is not to be read – or rather it is not only to be read. It is to be looked at and listened to. His writing is not about something, it is that something itself. [–On Joyce’s Finnegans Wake: Dante...Bruno.Vico..Joyce, 1929]

Beckett: For Proust the quality of language is more important than any system of ethics or aesthetics. Indeed he makes no attempt to dissiciate form from content. Form is the concretion of content, the revelation of a world. [–Proust, 1931]

The Death of God and the Meaning of Life by Julian Young; Routledge, 2003

Samuel Beckett and the End of Modernity by Richard Begam; Stanford University Press, 1996

All That Fall by Samuel Beckett; Grove Press, 1957

Frescoes of the Skull: The Later Prose and Drama of Samuel Beckett by James Knowlson, John Pilling; John Calder, 1979

The Long Sonata of the Dead: A Study of Samuel Beckett by Michael Robinson; Grove Press, 1969

A proper MLA citation for an online work such as the vtheatre project would look like this:

This work is licensed under a Creative Commons Attribution-NonCommercial-ShareAlike 2.5 License.