This "notes" page was started way back, when I didn't have subdirectories for THR215 Dramatic Literature and THR413 Playscript Analysis. The main division is simple: first course about the basic of drama (Grammar of Drama), the second -- about later modernity and transition to postmodern.

This is another reason why I do not have a showcase for THR413: the scripts too recent and all are copyright prootected.

Also, I have no "narrators" (as in Acting, Directing and Film). I wanted to introduced the "Plato Academy" (great philosophers), but they are not talking yet.

* 215: Shakespeare and After. But first, Aristotle and Sophocles (Oedipus).

All (actors and directors) are required to take 215 Dramlit.

Both courses are aimed at performing aspects of drama. Please take them before you take advanced classes!

I am directing Four Farces & One Funeral based on Chekhov's one-acts, read the plays (online or in the library). We will start with this "mini-chekhov"!

Fall 2005. I teach both classes. Subscribe to dramlit group! Anatoly


Last year at the end of the semester I tried the playwrighting section and this experiment proved to be very productive. We will do it again -- you write your own scenes and monologues! My notes on this new component will be collected @ WRITER page. See you in class!

This page is for the terms I might use in class, but the words are not in textbooks' glossaries. PM or POMO is postmodernism and most of the terminology is about several methods of analysis in this latest trend of philosophy (different writers).

... Nietzsche (and many after) did stress the fact that new school of thought "erases the disrinction between philosophy and literature." Therefore, "agrument is replaced by free association." [ More -- in class ]

The nomad is not at all the same as the migrant; for the migrant goes principally from one point to another, even if the second point is uncertain, unforseen, or not well localized. But the nomad goes from point to point only as a consequence and as a factual necessity; in principle, points for him are always relays along a trajectory. - G.Deluze and/or F. Guattari A Thousand Plateaus (p380)

The rhizome, according to Moulthrop, is the "concept of social order defined by active transversal or encounter rather than objectification... Figures for this order include the ocean of the navigator or the desert of the nomad." (Moulthrop, 301)

Sign : A deterministic, functional regularity or [16]stability in a system, also sometimes called a [17]sign-function. Something, the [18]signifier, stands for something else, the [19]signified, in virtue of the sign-function. May be either [20]lawful, [21]proper, or [22]symbolic depending on the presence or absence of [23]motivation. This is, of course, a very general definition, but it is in the tradition of both semiotics and general systems theory to think very generally. Contains: [24]signifier, [25]signified. Cases: [26]lawful, [27]proper, [28]symbolic. Synonym: [29]sign function.

Motivation : The presence of some degree of necessity between the [56]signified and [57]siginifier of a [58]sign. Makes the [59]sign [60]proper, and complete motivation makes the [61]sign [62]lawful. For example, a painting may resemble its subject, making it a proper sign. Antonym: [63]arbitrariness.

Arbitrariness : The absence of any degree of necessity between the [64]signified and [65]siginifier of a [66]sign. Makes the [67]sign [68]symbolic. For example, in English we say ``bachelor'' to refer to an unmarried man, but since we might just as well say ``foobar'', therefore ``bachelor'' is a [69]symbol. Antonym: [70]motivation.

Icon : A [76]proper sign where the [77]motivation is due to some kind of physical resemblance or similarity between the [78]signified and [79]siginifier. For example, a map is an icon of its territory. isa: [80]proper sign.

Index : A [81]proper sign where the [82]motivation is due to some kind of physical connection or causal relation between the [83]signified and [84]signifier. For example, smoke is an index of fire. isa: [85]proper sign.

Rule : A functional regularity or [92]stability which is conventional, and thus necessary within the system which manifests it, but within a wider universe it is contingent, or [93]arbitrary. For example, if we wish to refer to an unmarried man in English, then we must say ``bachelor'', even though ``bachelor'' is a [94]symbol. Synonym: [95]code, [96]semantic relation. Antonym: [97]law.

Code : The establishment of a conventional [100]rule-following relation in a [101]symbol, represented as a deterministic, functional relation between two sets of entities. Synonym: [102]semantic relation, [103]rule.

Go to super-market to see pomo art; it's everywhere. Turn on your TV. You see?

PS. Many crutial concepts are missing: complete and incomplete texts (important for Spectator Theory), imagination, emotion(s) and memory... Feelings -- not only communications but manipulation (action). As a result our emotions are real but of the higher(?) nature. Fear is overcomed fear. They are not imitation of emotions, but the memory of cathartic experience superimposes new (theatre) emotions of the raw ones. [Bring back the "pathos" as working category] Collect the PM pages, at least by linking. 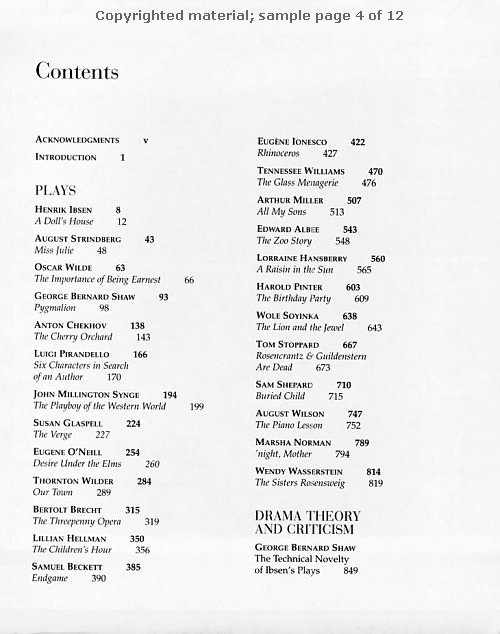 DIRECTORS: Course objectives are to improve:

1) awareness of principles and patterns in playscript construction;

2) knowledge of purposes and methods of playscript analysis and production conceptualization;

3) ability to analyze scripts in detail;

4) ability to formulate a conceptual overview of a script toward the goal of theatrical production; and

5) ability to communicate the concept clearly.

* ALL: Participation in class discussion is vital to expand and to demonstrate your awareness of course materials and to develop your ability to participate in reasoned discussion.

THIS TEXTBOOK for undergraduates is a systematic introduction to DRAMATIC Literature within a theatrical context and to Theater Art within a literary context.

It comprises two parts. "Part One: the Preface" consists of five essays on dramatic theory, to which are added five shorter plays as examples, with introductory notes and commentary. The point of view of the essays is psychological, and the drama is observed in its relation to common elements in human behavior. Consideration of it is controlled by the discriminating use of certain lieterary and theatrical terms. Thoughtful analysis of the content of a play enforces close interpretation of the lines and the patterning of the complex dramatic experience. This, in turn, calls for recognition of the theatrical potential of the playscript and for unusually creative reading. Once fully realized, the play then invites discussion in historical perspective and critical consideration of its form and ideas.

"Part Two: the Plays" is an anthology of eight longer dramas, preceded by introductory notes and followed by pairs of selections from dramatic criticism. The plays in Preface to Drama, counting the short ones in Part One, make up a baker's dozen, representative of our Western Civilization. Here are exemplified the short play, the medium, and the long--comedy, tragedy, and other types--classical, romantic, and realistic--ancient, more modern, and contemporary--European, British, and American. A handful of the great historic dramatists are here: Sophocles, Shakespeare, and Moličre. So, too, are the several fathers of modern drama: Ibsen, Shaw, and O'Neill. And here, as well, are significant recent dramatists: Tennessee Williams and Arthur Miller. Modern literary playwrights, Laurence Housman and Thornton Wilder, rub elbows with theatrical actor-dramatists, Noel Coward and Howard Lindsay. Even the librettist, W.S. Gilbert, has his niche. But the plays selected for inclusion are not merely representative; they have proved to be evocative of student interest and of class discussion, whether for their eduring values or for their immediate relevancy.

I PAGE PRELIMINARY--ORIENTATION TO DRAMA 3

I. Dramatic, theatric, and semantic elements in life 3
2. Drama in three dimensions 7
3. The ambiguity of "drama" 9
4. Literature, theater art, and drama 10
5. "A stageplay" and "a drama" defined

II. THE PLAYSCRIPT --CREATION BY THE PLAYWRIGHT 25