"Fathers and Sons" in Generations

society as Family and Family as Society

Family must be seen together with the evolution of the sense of Individual: Self

Compare themes of Love and Family.

Postmodern -- THR413 Playscript Analysis. Diffirent methods to use: Marxism, Semiotics, Postmodern (where to introduce it, the ways to approach the subjects).

1 : a group of individuals living under one roof and usually under one head : HOUSEHOLD

2 a : a group of persons of common ancestry : CLAN b : a people or group of peoples regarded as deriving from a common stock : RACE

3 a : a group of people united by certain convictions or a common affiliation : FELLOWSHIP b : the staff of a high official (as the President)

4 : a group of things related by common characteristics: as a : a closely related series of elements or chemical compounds b : a group of soils that have similar profiles and include one or more series c : a group of related languages descended from a single ancestral language

5 a : the basic unit in society traditionally consisting of two parents rearing their own or adopted children; also : any of various social units differing from but regarded as equivalent to the traditional family b : spouse and children

6 a : a group of related plants or animals forming a category ranking above a genus and below an order and usually comprising several to many genera b in livestock breeding (1) : the descendants or line of a particular individual especially of some outstanding female (2) : an identifiable strain within a breed

7 : a set of curves or surfaces whose equations differ only in parameters

8 : a unit of a crime syndicate (as the Mafia) operating within a geographical area

Next: god: between husband and wife

What has influenced my plays the most is my knowledge of the drama of all time - particularly Greek drama.
-Eugene O’Neill, 1929

I chose [Desire Under the Elms] because of its powerful story of desire for completion and for identity or position in the family fueled by unbridled passions. These passions, unleashed like furies, drive the characters toward their perceived goals, but also hurl them into the tragic abyss. This story draws on several myths which I like, so we have a story that resonates with Greek tragedy: Hippolytus, Phaedra, Oedipus and Medea.
-Walter Dallas, 1999

Greek tragedy grew out of the public rituals of song, sacrifice, dance, and worship honoring Dionysus, the god of wine, of vegetation and growth and of procreation and exuberant life in the fifth century B.C. Since Greeks believed that the universe was not chaotic and irrational but based on obeyed law, the typical Sophoclean tragedy is one in which Dike, the natural order, is defied and by the play’s end will reassert herself in a natural way. Like Dionysus, who is described with conflicting characteristics such as procreative life and lethal destruction, the tragic hero is a character compounded of good and bad, in which what is bad tragically, brings down in ruin what is good. We feel pity and fear for the tragic hero because he or she is like us. The events leading to the tragedy are the natural result of the weakness and virtues of the tragic hero in combination with the other characters in the play.

Euripidean tragedies vary slightly from this pattern. Euripides believed reason and not belief or formula or magic to be the guide to life, but he also maintained that we have in us, besides reason, non-rational emotions which are necessary but may run wild, thwarting our reason and bringing calamity. Euripides’ tragic hero is mankind. Some natural passion or folly breaks its bounds, and the penalty has to be paid, either by the sinner or by those around him or by both. While in the Sophoclean tragedy the interlock between character and situation results in disaster for the hero, in the Euripidean tragedy the situation is nothing but the setting for the outburst of unreason. The difference between the method of the two playwrights is also evident in their use of the chorus. While the chorus in Sophoclean tragedy is part of the action, the chorus in the Euripidean tragedy only sympathizes with the actors.

The plot of tragedy was, with few exceptions, drawn from myth. Plays written by different playwrights often told the same stories. The audience, already knowing the outcome of the play before it began, enjoyed watching how the playwright’s heroes would respond to the events that would lead to their tragic end. In his book Greek Tragedy, Bernhard Zimmermann noted that the achievement of the tragic playwright was measured, "by the manner in which he elaborated the traditional framework of the myth through the representation of characters and their motives, the emphasis and attenuation of plot elements, the insertion of minor figures - in short, through fresh interpretation of material supplied by tradition."

In Desire Under the Elms, O’Neill reworks the principles of Greek tragedy into his play. At the party, the neighboring farmers resemble an Euripidean chorus as they comment on Eben and Abbie’s affair, the paternity of Abbie’s son, and Ephraim’s ignorance of the situation. In his essay "The Tragic Cosmology of O’Neill’s Desire Under the Elms," Preston Fambrough points out that the "leitmotif "thin’" functions to reveal at every turn of the action the transcendent, inscrutable force working through the multiplicity of identifiable human motives in the play." When Eben accuses Ephraim of killing his mother, Simeon disagrees saying, "No one never kills nobody. It’s allus some thin’. That’s the murderer." This thin’ permeating the Cabot farmhouse chases Ephraim to the barn at night and frightens Abbie in the parlor. O’Neill evokes the Greek myths portrayed in Phaedra, Medea, and Oedipus the King and adapts them to an American mythical setting.

According to Greek legend, Phaedra desires her stepson Hippolytus. When Hippolytus rejects her advances, Phaedra commits suicide, leaving her husband, Theseus, a letter that accuses Hippolytus of trying to seduce her. Angry at his son’s betrayal, Theseus appeals to his father Poseidon, the god of the sea, for Hippolytus’ destruction and banishes Hippolytus from his kingdom. While Hippolytus is driving along the shore, a sea monster sent by Poseidon frightens the chariot horses and Hippolytus is trampled to death. In Euripides’ play Hippolytus, Phaedra is virtuous. The goddess Aphrodite, angry at Hippolytus for his one-sidedness–nothing matters to him but the fanaticism of his virginity–inspires Phaedra with her fatal passion for Hippolytus. Both Hippolytus and Phaedra are the tragic victims of single-mindedness. In Hippolytus, Euripides cautions that an unbalanced mind or temperament like Hippolytus’ is unsafe.

O’Neill evokes both Hippolytus and Phaedra in Desire under the Elms. Like Phaedra, Abbie desires her stepson. Alone with Eben, she attempts to seduce him. After Eben rejects her advances and leaves for a visit to Minnie, Abbie lies to Ephraim that Eben tried to seduce her. Like Theseus, Ephraim’s initial reaction is to banish Eben and then to kill him. And like Theseus, Ephraim agrees to pass over Eben so that his and Abbie’s son can inherit the farm. Ephraim, Abbie, and Eben’s fight over Cabot farm parallels Theseus, Phaedra, and Hippolytus’s power struggle over the Athenian kingdom. Like Euripidies’ Hippolytus, Eben’s single-minded desire to posses the Cabot farm brings about his downfall.

The final Greek source is Euripidies’ play, Medea. According to Greek legend, Medea falls in love with Jason, a Greek hero adventuring with a ship and a band of men in Asia Minor, and helps him to achieve fame in his travels. When they return to Corinth, Jason leaves Medea and their children to marry Glauce, King Creon’s daughter, to strengthen his political position. Angry and humiliated, Medea is determined to avenge herself against Jason. She tricks Jason into believing that she has accepted his new marriage by sending their two children with a golden robe for his new wife. The robe is poisonous and kills Glauce when she puts it on as well as her father Creon when he attempts to save her. Medea decides she must also kill her children to end the house of Jason. Her passion for revenge overwhelms her and she succeeds in murdering them. In Euripides’ Medea, Medea succeeds in her revenge. After the murder, she is transported to safety by the god Helios. Euripides’ Medea is tragic because her passions are stronger than her reason and her passion destroys innocent people — her children, Glauce, and Creon. In Desire Under the Elms, Abbie suffocates her son to prove her love for Eben. In his stage directions, O’Neill has Abbie hesitate before committing the murder. Like Medea, Abbie’s passions are stronger then her reasons.

In order to understand Eben’s reasons for standing by Abbie, we need to examine the story of Oedipus. According to Greek myth, an oracle predicted that Laius and Jocasta, the King and Queen of Thebes, would bear a son that would kill his father and marry his mother. At Oedipus’ birth, Laius ordered his son’s feet to be bound and his son to be left on a hill to die. A shepherd disobeyed Laius’ orders and gives Oedipus to the childless King and Queen of Corinth to raise as their own. As a young man, Oedipus went to visit an oracle. The oracle told Oedipus to leave — that he didn’t want to be in the company of a man who will murder his father and marry his mother. Because he loved the parents that raised him, Oedipus decided to keep them out of danger by not returning to Corinth. On the road to Thebes, he kills Laius and his party for mistreating him. One man is spared to report the incident. Before reaching Thebes, Oedipus encounters a Spinx that is wrecking havoc on the land. By solving the Spinx’s riddle, Oedipus destroys the Spinx and is made the King of Thebes by marrying the current Queen, Jocasta. Because Thebes is plagued by misfortunes, Oedipus and Jocasta consult an oracle that predicts Thebes will not be free of plagues until Laius’ murderer is punished. Searching for Laius’ murderer, Oedipus learns his true identity. With the truth revealed, Jocasta commits suicide and Oedipus blinds himself and leaves Thebes as a beggar.

O’Neill’s Eben resembles Sophocles’ Oedipus in many ways. First, he is caught up in an Oedipal conflict of wanting to murder his father and so "save" his mother. Later, he decides to share the blame with Abbie for the murder of their son. Like Oedipus, Eben did not intentionally commit his crime–the words of his anger and betrayal gave Abbie the idea of killing their son to prove her love. And like Oedipus, Eben actively participates in his punishment by offering himself up to the police. 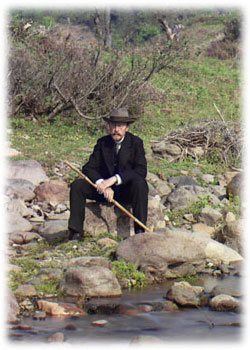